The Endurance Society hosts Infinitus, an interesting race weekend (or more, depending on your distance) in the Moosalamoo National Recreation Area near Goshen, VT every May. Events include the 8 mile, marathon, 88k, 100 mile, 250 mile, and 888k. The registration button for the 888k warns “you will regret this!” The marathon course consists of one full loop of the course used for all events except the 8 mile race. The loop consists of one smaller loop just over 7 miles long and a second longer loop just over 19 miles. The two are connected in a – yes, you guessed it – figure 8 and total about 26.5 miles. My watch died around 24 miles, so I couldn’t connect the loops shown below.

The course has over 3,500′ of gain. The elevation I recorded is very close to that shown on the website:

I had a work related event in Boston just before Memorial Day weekend and looked for a race nearby. I found two – Infinitus and the Pineland Farms 50k just a few hours from Vermont in Maine. I was excited about the prospect of finally “doubling” and getting back to back states completed. I decided to wait and see how SweetH2O went before committing to do both Infinitus and Pineland Farms. If you’ve read that report, you will not be surprised that I decided somewhere on loop 2 of SweetH2O that doing back to back races would be stupid and spending a weekend waiting on me to meander through 2 states might not be the most thoughtful thing to ask my awesome and patient crew/boyfriend to do.

The year I ran Infinitus, there was an 8k option instead of the 8 mile option. Given that we were still in the early months of a new relationship, my awesome boyfriend expressed interest in the 8k. I emailed the RD, Andy Weinberg, to ask whether the marathon and 8k start together and cover the same small loop to start so that we could run together. I also asked whether this might be too difficult a course for a newish trail runner. Andy responded immediately and enthusiastically. He explained we could run that first loop together for the “8k” and also noted that it was really more of an 8 mile race. He noted that we had enough time with the longer distance events that we could walk the whole thing if we wanted – a huge contrast to not so SweetH2O. Andy also said he would show my awesome crew/boyfriend good spots to meet me while I did the 19 mile loop. How could we not sign up?

We drove from Boston to the race location at Blueberry Hill in Goshen, VT. Google thoughtfully took us on some very isolated back roads with no cell reception. Comments were made about the unusual tourist activities I drag us to and that was before we turned off to the forest service “road” that would take us to the start. The 888k had started over a week before and the 250 mile race had been in progress for a few days. The parking area closest to the building was pretty muddy and we had a little trouble getting the rental car to a parking spot. Between the mud, the back roads, and the Yaris we had in Georgia, my friendly crew was apparently making notes to himself about looking into different types of vehicles for race trips. Eventually, we picked up bibs and met Andy, who gave us detailed directions to get to the best spots for crewing. He asked if we would mind dropping off water at one of the stops while we went to check out the course. We got the car back out of the mud and found the water drop off – it was literally just a place to stash water and we were swarmed by mosquitoes in the few minutes it took to walk down the trail. Perhaps I should have brought bug spray?

We headed to Brandon, VT and looked around the town while waiting for pizza to go. The town was pretty and we enjoyed some of the interesting decor near the river.

We settled into the Brandon Motor Lodge that was 20 minutes from the start and recommended by the race. We were happy to find they had bags of ice we could take for the next day. I’m always worried about dragging someone else to my occasionally questionable hotel/motel/Holiday Inn choices but this one was perfect – cheap, clean, close to the race, and chickens wandered around on the property. We slept well while a crazy storm hit the area around 3am. When we woke up on race morning, it was windy and branches were down everywhere. The 8:08am start (of course) gave us time for a somewhat relaxed morning and enough time to pack up everything and check out.

The parking lot fields were more crowded on race day and much, much muddier after the storms. Plenty of people picked up packets on race morning and had time to walk across the road to get ready in their cars. We waited in the warm car until just before the start.

Race report: The 8k, marathon, and 88k runners all started together. We crossed the road and pretty quickly hit a small incline on a wide section of trail that sorted out the crowd. My running partner and I stayed together at the back and tried to take it easy. About a mile in, we turned a corner and had a fantastic view. Andy and other volunteers were waiting and checking in on everyone. We took a picture, talked about the crazy hill coming up, and continued on the course.

My super awesome running partner was not happy with the hill. There were some distractions along the way, but he was not distracted.

The climbing eventually ended and then we hit the infinite mud. This was the muddiest race to date for me. My running partner found a nice walking stick to help with the mud and forged ahead. He claims not to remember this, but he repeatedly noted during miles 4 – 7, “This is dangerous!” Despite the danger, we enjoyed the cool and sunny day, the views, the other entertaining runners, and eventually, the finish line. Unfortunately, he rolled his ankle not long from the finish, so he didn’t get to enjoy blasting through the finish line.  When Andy gave my running partner his medal, he took a few minutes to ask how he liked the race and then pointed out the mountain we had just come over. I was so proud and happy for him! We would have to wait to celebrate his finish though, I still had the 19 mile loop to go.

The second loop started with many interesting distractions, some pictured below. 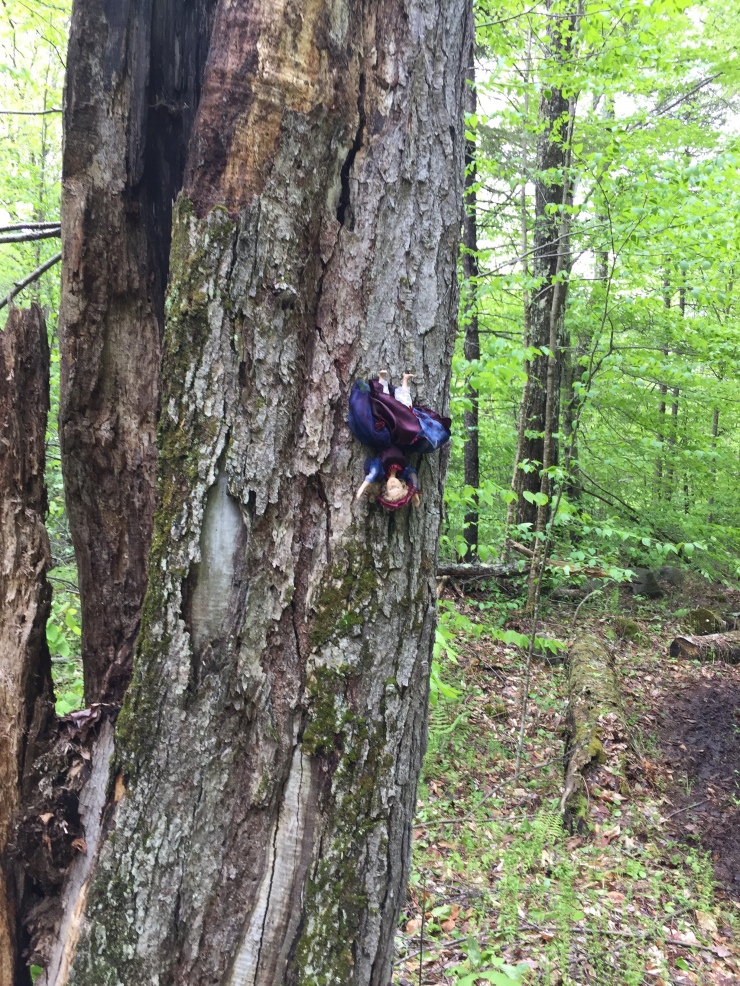 This section was marshier but flatter initially. I wasted so much time looking for bug spray in the car when we finished the first loop that I hadn’t wanted to change socks, but had to stop and remove the huge rock from one shoe about a mile into the second loop. It made such a difference to remove the mud encrusted socks! Many miles into the second loop, I recognized the water jug we’d put out the day before and was surprised to see my injured running partner/crew running to meet me on the trail! He had eaten, iced his ankle, and relaxed after finishing and seemed to have made a full recovery.

With the good news that he was doing fine, I enjoyed the mostly mud free miles and the descents before the climbs started again. At some point during one of the many climbs, a phrase from the course description got stuck in my head and my brain endlessly looped the fact that “the course features several climbs.” I did not agree that this was a feature of the course. My brain was also endlessly entertained with one of the trail names – Mt. Moosalamoo – and played with that word for a few miles. Shut up, brain. It must have been after mile 20. I explained this at one of the stops where I met my awesome crew and he patted me on the head and assured me the end was near. The bugs were also pretty bad at this point and I became obsessed with the net hats that some of the other runners were wearing. I don’t know what these mosquito-like bugs were, but they would swarm you if you stopped at all. My pace picked up around mile 23 because I could not wait to leave the bugs behind. The final mile or so of the long loop overlapped with the short loop, so when I recognized the trail, I was elated. The final mile was wide and mostly flat. I flew to the finish where the party had been going for hours, and would continue for another day while the longer races finished.

After the race, we enjoyed some of the food, bought a lot of the cool Endurance Society shirts, mugs, stickers, etc. for sale. We also enjoyed the signs below. 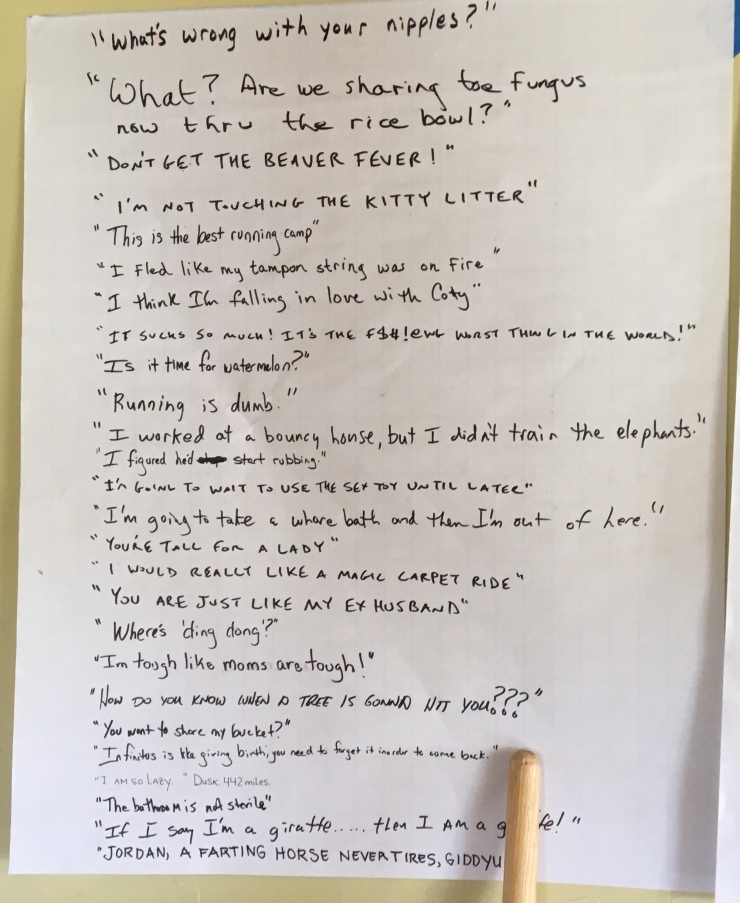 We eventually headed out to spend the rest of the holiday weekend on the New Hampshire beach, trying to remove the mud from our toes.

Our windbreak at Salisbury Beach on a cold Memorial Day.