As someone worried about making cutoffs, I knew Boston would not be the marathon I ran for Massachusetts. I think I first read about Stone Cat on Marathon Guide and saw several positive reviews. It sounded like a fun race with a nice long 12 hour time limit thanks to the 50 mile race that starts 15 minutes before the marathon. The website had plenty of information except about elevation, but did say that the biggest climb was 150′. With two loops and 12 hours, I thought I could handle that. The race takes place in Willowdale State Forest, less than an hour from the Boston airport. Marathoners run two loops of about 12.5 miles plus a couple of laps around the soccer field to start (pictured above). Here’s the rough map from the website and mine for comparison:

I booked my hotel and car, then waited until registration opened in July and hoped I would get in – the race has had to go to a lottery system in the past because it sells out. In 2016, it was a typical registration on Ultrasignup and I had no problem registering for the marathon. My decision to run Stone Cat was reinforced when I met a Boston area runner at Woodstock who said Stone Cat is a lot of fun and had the best aid stations she’s ever seen.

I flew in Friday before the race, somehow got a small SUV instead of the usual compact car, and we (me and the friendly stranger from the Woodstock trip, see below) headed out for some sightseeing in Salem before going to packet pickup in Beverly, MA. I got my bib and long sleeved race shirt, looked around the running store, then we went to check in at the hotel before heading over to see the trails at Willowdale. We stayed about a 20 minute drive from the start line at Doyon School. The drive to the start from the hotel was easy and the trails looked fairly smooth. The fall colors were beautiful.

Race report: We left in plenty of time for the 6:30am start but had to park in the lot around the corner and down the street from the school. Just over 100 runners finished the 50 miler that started at 6:15am and over 200 did the marathon, so parking went fast. The walk from the ball field parking lot just under half a mile away wasn’t bad except it was very, very, very cold. As usual, I was not dressed properly. The forecast showed a high in the mid-40s, so I did wear a long sleeved tech shirt over my sleeveless short and shorts and I also had gloves. But I knew we would be able to wait in the school gym before the start so I wasn’t worried about the cold. Fortunately, the friendly stranger was prepared and I was able to borrow a hoodie.

Check in was in the school gym and we had access to the indoor, heated bathrooms before the race start. The bathrooms were sized for elementary students, so that was fun. It was great to have so many flushing toilets in a warm bathroom on a cold morning. Runners were called out to the start line a few minutes before the race. We were instructed to run two loops around the ball field to make up for the trail loops being under 13.1 miles. The race starts before sunrise, so we all had headlights. The combination of 200 people with lights running in a huge circle accompanied by bagpipes was beautiful, and then it started snowing lightly.

In addition to being slow, I was worried about tripping in the dark. I stayed at the very back of the pack and was entertained by the talkative locals. At one point they were rating the small bridges on area trails – good, wicked good, or wicked hahd as far as I could tell. This was the most entertained I have ever been while eavesdropping during a race. A few people near me fell before the sun came up, but no one was seriously injured. I got to the first aid station after sunrise and there was a box for us to leave headlamps to be taken back to the start. There was also plenty of food and plenty of hot drinks! I was impressed.

The trails were covered in leaves, so some roots and rocks were hard to see but the trails were not too technical. The elevation for each loop was just over 500′.

The park is beautiful and there are some unexpected finds along the trails. I won’t spoil the surprise but the locals will be happy to tell you about the history of some of the objects. We had a mix of single track and wide jeep roads. 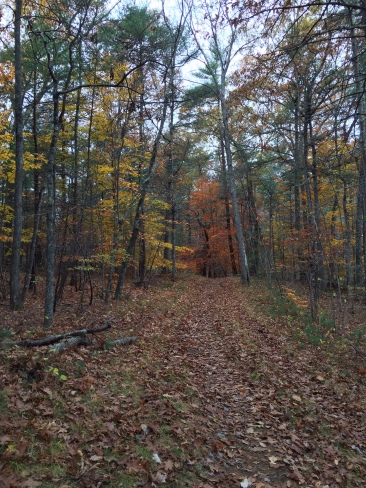 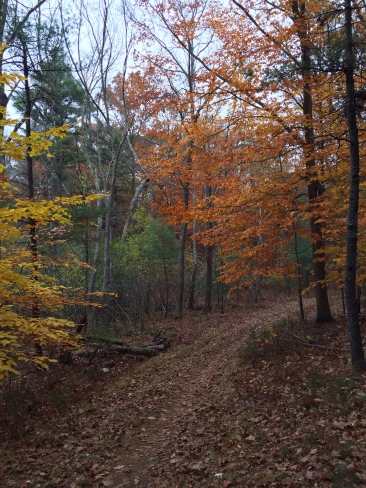 About 12 miles into the race, I caught up with a large group of local runners and recognized the voice of the runner I’d met in Michigan. We finished the loop and she told me about the local running club members who had all signed up to celebrate one member’s 100th marathon that day. They were all friendly and entertained me and each other with plenty of stories. They gave me a few recommendations for other New England races, too. The consistent topic of conversation among all of the locals that I overheard or talked with was what the finisher award would be that year. The RDs give something different every year and the marathoners get a different finisher award than the 50 milers, so there is a lot of discussion and speculation prior to registering because some years the racers get wicked good awards. I stayed with the group through the end of the first loop and then met the friendly stranger/crew to get my coke and chips.

On the second loop, the aid stations had pancakes! With bacon in them! The friendly stranger had made his way out to an aid station where he was surprised to see 1) trail runners do a lot of walking and 2) the aid stations are buffets. I did my best to finish the second loop a little faster so we could do some more sightseeing. At the finish, I was happy to see it was what the locals would call a jacket year:

This was one of the races that I had put on my list early in the “50 states trail marathons” planning and it was everything I’d hoped for in a race.

Off trail: I didn’t anticipate meeting a friendly stranger on the way to Woodstock, or talking to him every day after that for 6 weeks, or having a “first date” in Nashville midway between us, but I did and the 6 weeks of calls and the first date went so well that I thought, “why not invite him to join me in Boston?” So he did and that’s how he learned how to crew on the second date, 2 months after we’d met.

If you are bathroom shy and traveling with someone you want to impress, be sure there is a private place to go before your race.

When you book a stupidly early flight on a Sunday in early November, it is a wonderful feeling when the alarm goes off at 3am but it’s really only 2am!