There’s plenty of information about the race, course, expo, and how to enter the lottery on the MCM website.

The athletic supporter opted to join me for the trip to DC. We stayed in Alexandria instead of DC so I would only have to ride a couple of stops on race morning. We went a day early for some sightseeing and ended up doing a lot of wandering around Old Town Alexandria. After an early dinner, we plotted out where the AS would be waiting on the course and what time I should be expected. I apologized in advance for being stressed about a PR attempt. Then I reviewed the course one more time and did not sleep at all, for the third night in a row.

Race report: Light rain was expected in the hours prior to the race start and it was cool but not very wet when I left the hotel. The metro was crowded but easy to board and get to the stop. I waited in the warmth of the metro awhile before heading up to the surface with the thousands of others. Then thousands of us waited outside the race entry because the metal detectors had stopped working in the rain. We continued to wait until they started waving though people without bags and just wanding us. There are a lot of unusual things done to start The People’s Marathon and unfortunately I missed them all with the wait at the security gate. I heard the howitzer that signaled the start of the race. With the wait at security and so many late arrivals, the self-seeding corrals were not working as they should have. It was a little more chaotic than I hear is usual at this race, but once we were running, it was a nice day. Nothing motivates you like Marines yelling that they didn’t get up early on a Sunday to watch you walk. I unfortunately walked a lot. My goal changed from PR to just beating the bridge. When AS finally found me a few miles after we had planned, I got to enjoy a delicious cold coke. It was amazing and resulted in a much faster final 10k, but nothing near a PR. This would be the last road race for a while.

Off trail: It’s better to assume your athletic supporter will not be able to meet you on the course than to be disappointed when they don’t show. On a related note, bring really good ear plugs or leave your snoring athletic supporter at home if you need plenty of sleep before a PR attempt.

Even if you’ve visited all of the monuments many times, it’s pretty cool to run past so many of them at once.

For the punk rock bird. 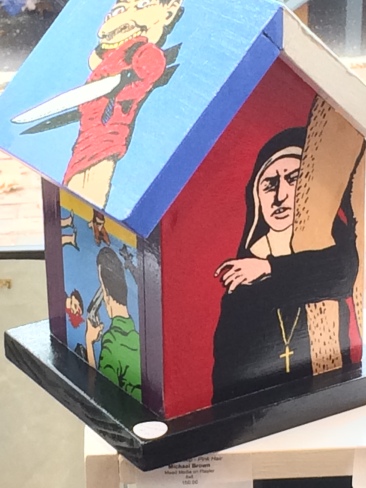